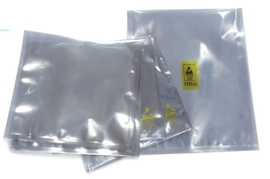 It means to attach a layer of SiO2 on the PET surface in the environment of 1200℃ with vacuum evaporation deposition on the PET plastic film surface, which is commonly known as transparent exhaust protective film. It has the same high protection as aluminum foil, but is also a transparent film. And has a very high heat resistance, can correspond to X-ray metal detector, and will not produce harmful gases after burning, which is a protective film sparing no effort of caring for the Earth's environment. 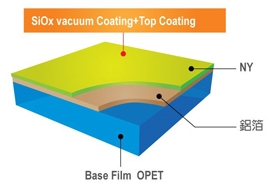 ◣Features
1. Contains silicone dioxide that achieves excellent effect of moisture resistance.
2. With electro-static isolation, the external electro-static discharge directly to protect the contents of the package.
3. Good transparency, contents of the package can be confirmed directly.
4. With excellent resistance to friction, the original impedance effect is not easily lost during use, good anti-static effect, the surface resistance 109-1011Ω。

Transparency
- Since it is clean vacuum heated film, so it is most suitable for the packaging that emphasizes transparency.

Can pass the metal detector check, can also be used with microwave oven (suitable for microwave).

Suitable environment
- Almost will not be affected by temperature, humidity.